Review And Outlook Of S&P 500 Earnings, Dividends, And Balance Sheets

This article was originally published on Seeking Alpha.

Disclosure: I have no positions in any stocks mentioned, and no plans to initiate any positions within the next 72 hours. I wrote this article myself, and it expresses my own opinions. I am not receiving compensation for it (other than from Seeking Alpha). I have no business relationship with any company whose stock is mentioned in this article.

Consensus expectations for 2014 earnings for the S&P 500 (SPY) appear reasonable at 10%, but an analysis by sector shows that earningsgrowth is narrow, relying heavily on Financials and Consumer Discretionary (mainly catalog and Internet retail). Here are some other things that struck me about the S&P earnings data:

o Weak Capex: At this stage in the economic cycle, capital spendingshould be contributing to broad-based growth. But only the energy sector is spending aggressively.

o Weak banks: Bank lending should also be contributing, but lending is sluggish due to the aftermath of the crisis. So middle-market firms areturning to non-bank lenders.

o Cash hoards: Firms in tech and healthcare are sitting on huge piles of cash but are not spending or acquiring. (This may be good or it may be bad: The firms are showing capital discipline, but are not contributing to a healthy ecosystem in their sectors or in the economy.) What would trigger spending? Lower valuations, better organic growth prospects, or a change in tax regimes to allow repatriation of cash held overseas.

o Earnings Insight by John Butters (formerly of Thomson Reuters, where he did earnings research since 2000). John is also the author of the 2014 Earnings Outlook.

o Cash and Investment Quarterly and the Dividend Quarterly, both written by Michael Amenta, CFA.

o These reports are written by data maven Howard Silverblatt, who contributed additional material used in this article.

Earnings revisions in Q4 were neutral: Estimate cuts were about 4%, in line with historic averages. It is common for estimates to be trimmed in a rising market (see·Jan 3 report). Negative guidance in Q4 came from 97 companies, with positive guidance from 13.

· Historic S&P Earnings: In the chart below, the solid bar shows projections for EPS 1-year in advance, and the striped bar shows the actual reported EPS. Conventional wisdom says that bottom-up estimates have an optimistic bias, but I believe that this is no longer true after Sarbanes Oxley and after adjusting for recessions. I base this on Jeff Miller’s excellent research on earnings optimism. Jeff challenges conventional wisdom that estimates from sell-side analysts are consistently high at the beginning of each calendar year. (Take a look-you won’t regret it). 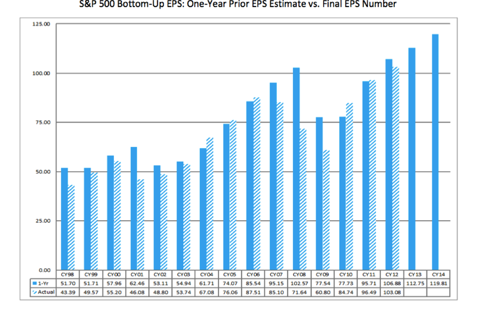 Earnings Growth by Sector: What Caught My Attention

· Telecom: Verizon has a disproportionate impact on Telecom. Without Verizon, 4Q EPS growth drops from 14% to 6%.

· Healthcare: Highest projected rev growth in 2014 at 6.4%. Sector has 4Q revenue growth of 4%, led by Biotech and HealthCare.

· Financials: This sector is driving 4Q earnings with 24% growth. Without financials S&P earnings growth in 4Q drops from 6% to 3%. Insurance earnings up 56% in 4Q (projected).

· Industrials: Sector has broad-based growth and modest expectations for 2014 EPS of 9%. 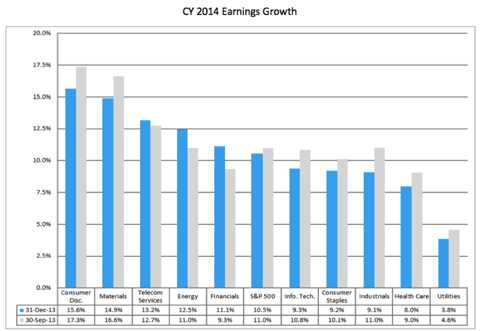 Current valuations are above historic trends, as shown in chart below. 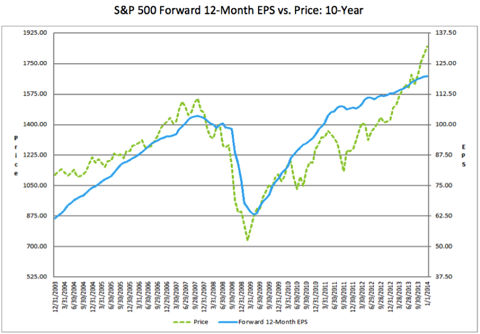 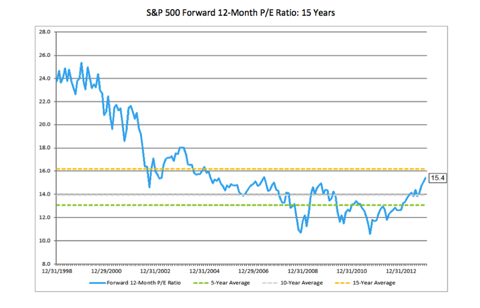 · Balance sheets also strong, with cash rising to over $1.3 trillion (see chart below).

· Cash flows are strong, especially in tech and healthcare. Capex is restrained (except in energy), leading to strong free cash flow generation in every sector except materials and health care.

· Tech dividends accounted for 15% of 2013 dividends (more than utilities and telecom combined).

· Financial dividends rose sharply in 2013, with 80 firms raising dividends and 2 decreasing dividends. The sector’s recovery from the crash is picking up steam.

Big piles of cash in tech land: Firms with high amounts of cash and cash flow

Exxon Mobil (XOM) showing negative CF in 3Q . Energy is a high-capex industry and falling oil prices are hurting profits. Energy accounts for 1/3 of all capex in S&P 500! XOM had negative $7.5 billion in cash flow during the third quarter. The reason is due to buybacks and dividends. XOM has had buybacks and dividends of $29 billion during the last 12 months, so it has heavy demands on its cash. 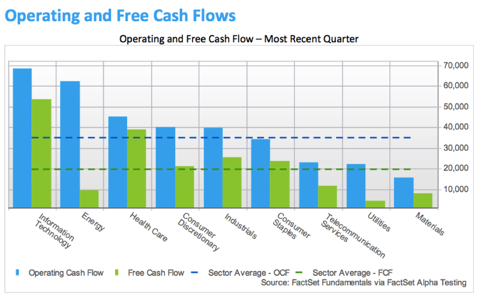 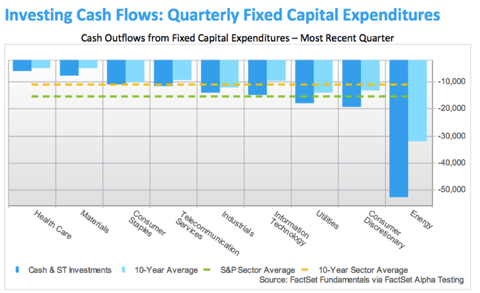 Additional disclosure: All written content is for information purposes only. Opinions expressed herein are solely those of Right Blend Investing and our editorial staff. Material presented is believed to be from reliable sources, however, we make no representations as to its accuracy or completeness. All information and ideas should be discussed in detail with your individual adviser prior to implementation. The presence of this article shall in no way be construed or interpreted as a solicitation to sell or offer to sell investment advisory services to any residents of any State other than the State of New Jersey or where otherwise legally permitted. This is not a complete discussion of the information needed to make a decision to open an account with Right Blend Investing, LLC. There are always risks in making investments, including the investment strategies described.

View all posts by: Greg Cimato